The true eternal does exist here.

Eternal Fighter Zero is a doujin-soft (Self published) fighting game developed by Twilight Frontier, who also developed other games such as Higurashi Daybreak, Grief Syndrome (A Beat-Em-Up based on Puella Magi Madoka Magica), and the official Touhou fighting games, such as Immaterial and Missing Power, or Scarlet Weather Rhapsody. The game features several characters from diverse visual novels by Key/Visual Arts, (And tactics, before Key split off from them), such as ONE ~ To The Radiant Season, MOON, AIR and Kanon, for a grand total of 23 selectable characters.

Gameplay is based on several other fighting games such as Street Fighter, The King of Fighters or Guilty Gear, and uses four buttons: Three buttons for normal attacks (Weak, Medium and Strong), and a fourth button whose function varies for each character. The game is notorious for its huge amount of in-jokes and references to the original visual novels, as well as other fighting games, as the characters take some of their move, or even their whole fighting styles, from those games. The game has a large cast, but, aside of the final boss Kanna from AIR, the characters are all well balanced, as tier lists don't really make much of an impact as with other games. 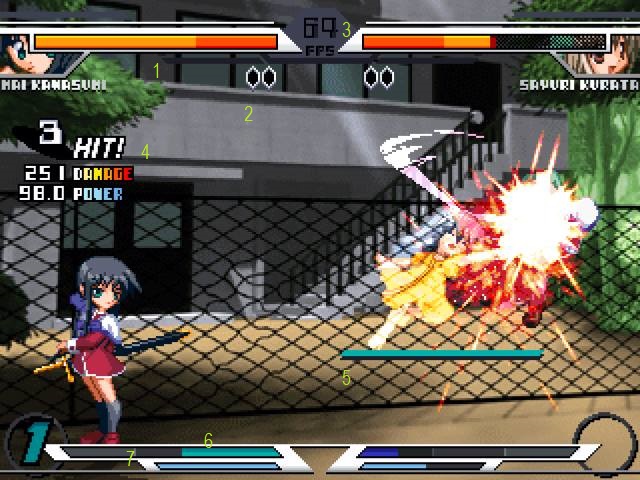 1. Life Gauge: Displays the remaining amount of life for each character. Each character begins with 10000 life. The darker part represents the zone where the character can use their Final Memory. When one character's life gauge is depleted, the opponent wins the round.

2. Win Count: Displays the number of rounds won. Once a character reached the maximum amount required, she wins the match.

3. FPS: Displays the frames per second. Usually varies between 60 and 64.

5. Juggle Meter: Also known as "Stun Meter", it displays the amount of recovery time before the player can regain control of the character. During that time, she's open for her opponent to extend the combo.

6. Special Gauge: Displays the character's SP. he number beside the gauge and the color represent the number of SP levels available for the characters, which allows them to perform super moves called "Eternity Specials". The maximum amount of SP levels is 3.

The main heroine of Kanon, Ayu is an agile and Easy-to-use character who fights with the mysterious powers of her winged backpack. She's oriented to an offensive style of play.

Sleepy Nayuki is an unorthodox character who fights with her unpredictable "Sleepy Boxing" style. As she consumes strawberry am, her offensive capabilities increase dramatically. Her skills are oriented to an offensive style or fast style, depending on how much jam she has eaten.

Makoto is a very fas character who uses her multiple gadgets to fight. Her projectiles linger on screen for long after being fired, making Makoto an ideal character for a defensive style of play.

Shiori is an agile character who fights with the power of anything cold, and a variety of projectiles. With all her long-ranged attacks and her energy shield, she's best suited for a defensive style and keep-away game.

Mai is a calm and versatile character who fights wih a sword in the "Iai" style, and calls a small ghost girl (Also called Mai) to help her in battle. Her sword gives her excellent attack and range, but has relative recovery time. he little ghost girl gives her he ability to attack at distances without taking risks.

Sayuri is a formal and elegant character who fights with her powers resembling those of a Magical Girl. She has good special moves, projectiles, and a decent method of attacking in midair, a command grab and 100% profitable counter, making her one of the most balanced characters in the game.

Mishio is a spear master who can augment her attacks with the elements of fire, or thunder. Her spear gives her excellent range in midair. However, she can only use half of her moveset with each element, and without one, she has very few moves. She's also the slowest character in the game.

Kaori is a vry fast character who fights with her unmatched boxing skills. Although powerful at short range, she has no projectiles or ranged attacks, making her weak against long-ranged fighters like Shiori. Because of his, she's oriented to a pressure style of play.

Nayuki finally wakes up in the "Memorial" revision of the game. Unlike her Sleepy version, Awake Nayuki is a very fast and agile character who uses her multiple kicks to fight. She's oriented to a rushdown style of play.

Akiko is an incredibly agile character who fights with a vast array of household items. Her multiple aerial hits make her strong in midair, and a single mention of her "Special Jam" is enough to make even the strongest warrior run away in fear.

Add a photo to this gallery
Retrieved from "https://kanon.fandom.com/wiki/Eternal_Fighter_Zero?oldid=11136"
Community content is available under CC-BY-SA unless otherwise noted.